The legend of Jeremy Lin

The hottest name is basketball right now is Jeremy Lin of the New York Knicks. I first heard of him when he was taken by the Golden State Warriors after not getting picked from the draft despite having good scouting reports and performance from the summer league. He completed his stint at Harvard and had a good run with the Crimsons. Here's some highlights of Lin's performance in the summer league of 2010:


John Wall eventually became the top pick from that batch.

Lin was a fan favorite at Golden State especially to the Asian community because he grew up in Palo Alto. Unfortunately, the Warriors had a lot of elite guards (Ellis and Curry to name a few) and Lin averaged only 10 minutes per game with a scoring average of 2.6. And those 10 minutes, if he's lucky, are usually "garbage time." But nonetheless, whenever he got in, the crowd appreciated since he's the hometown boy. But in the NBA, numbers like that don't usually result to long careers (unless you're Luke Walton).

So as expected, he was waived by the Warriors during the off-season to as the team cleared some cap space to chase DeAndre Jordan. He was then claimed by the Rockets but was waived anew before the start of the season to sign Samuel Dalembert. The Knicks eventually signed him to complete their roster but as Lin said, "its a numbers game," meaning he didn't expect to have long minutes with the Knicks given the perceived depth of the roster.

Lin knew that from the start, and the Knicks assigned him to the NBA D-League (or the NBA Development League). Now people have different opinions of the D-League. Officially, its a place for players with talent to improve their game and mature in a professional level. But some consider it as professional playground for NBA teams to "assign players they don't want right now but would probably be good for movement in the future," or something of that sort. And Lin is a D-League regular since his Golden State days.

However, last January, Lin got assigned to Erie Bayhaws and did a triple double. Check out his performance in this video:

The day after the game, Scott Schroeder of NBC sports wrote an article about Lin's triple double performance and how he could be valuable to Mike D'Antoni's rotation for the Knicks. Then on February 4, 2012, D'Antoni, perhaps out of desperation, got Lin to play against the New Jersey Nets which resulted to "Linsanity." And the rest, is pretty much history.

Was Lin stereotyped by scouts, trainers, coaching staff and players even? Most likely. This lowered his chances to succeed in the NBA early in his career. If not for the Knicks' point guard woes, Lin wouldn't get to show what he can do. Lin is of Asian descent but actually American by birth. How many Asians did the NBA ever had? You can only name a few, and please, not all of them are named Yao. And Lin is the first Asian American to be in the NBA (edit: he wasn't. Wataru Misaka gets that distinction and also played for the Knicks). Lin even tweeted last January 5, 2012:

"Everytime i try to get into Madison Square Garden, the security guards ask me if I'm a trainer LOL" 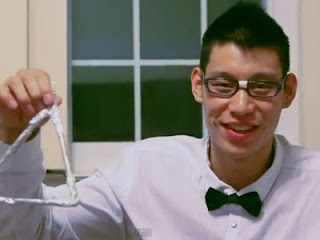 Now it makes you wonder how the Knicks will adjust their lineup when Baron Davis gets back from injury (that's a big if). Also, if I were Mike Bibby, I'd be worried about my slot in the Knicks.
Posted by Unknown at 8:09 PM