Paid Apps in the Nokia Store

I'm one of the few who still swear on what Nokia is capable of despite their recent setbacks. That's why I still hold on to the N8, arguably the best Symbian phone Nokia has released to date (its currently running in Symbian Anna, but scheduled to be upgraded to Symbian Belle next month). The Carl Zeiss Tessar powered 12MP camera is just one of the reasons why the device is such a keeper. The only problem I really have with the N8, and Symbian in general is the availability of quality apps. A few months ago, Nokia renamed the Ovi Store to Nokia Store which makes sense in branding and marketing. But the Philippines only had access to paid apps just recently, and I'm really glad Nokia decided to make third party commercial apps finally available locally. 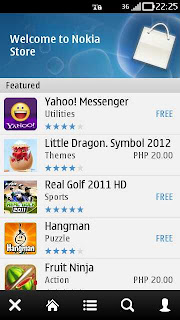 The number and quality of paid apps in the Nokia Store obviously pale in comparison against Apple's App Store and the Android Market. But you'll be able to grab some good apps for as low as P20. A number of HD games from Gameloft are priced aggressively.  The most expensive app I've seen so far is the excellent Gravity social networking client which sells for P150. I wouldn't be surprised if Nokia subsides a huge chuck of the pricing of apps. 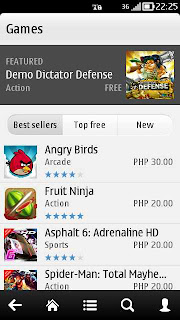 Many thanks to @loell for pointing out an important factor in making this work for me - as of this time, only Globe Telecom supports phone billing which allows you to access the paid apps from the Nokia store. You can still use a prepaid sim from Globe as long as you provide your credit card details from your account profile in the Nokia Store.
Posted by Unknown at 11:10 PM